So much of our experience was about the sights, smells, tastes and sounds we encountered. How can I capture in words the scent of orange blossom or the pungent smell of olive oil production? Or find a way to translate onto screen the sensory stories of my taste buds? At least the visual element is more easily shared through the many images I collected.

With this in mind, I’ve compiled a photo journal of the highlights of our trip. I’ve included commentary to give you some insight into the week’s learning journey, seasoned with links to find out more where you may wish to.

This was such a simple yet memorable activity. The sights, scents and tastes of the orchard as the sun beat down on us was so evocative – if paradise has an aroma, orange-blossom would be it! As if I didn’t already bemoan the quality of oranges in England, now that I’ve eaten one freshly plucked from a Peloponnese tree, I fear the bar has been raised even more.

One intriguing feature of the orchard was an orange-lemon tree – a tree that bears both types of fruit as the result of a successful graft.

FreeToBeP loved being amongst the trees and his orange harvest ensured a week’s very sufficient vitamin C intake for the whole family.

An interesting fact is that the intensive cultivation of oranges in the region dates only from the mid-20th century – prior to that, the delta of the Evrotas river and its tributaries was used as rice fields (a small percentage of EU-grown rice is still grown in Greece). 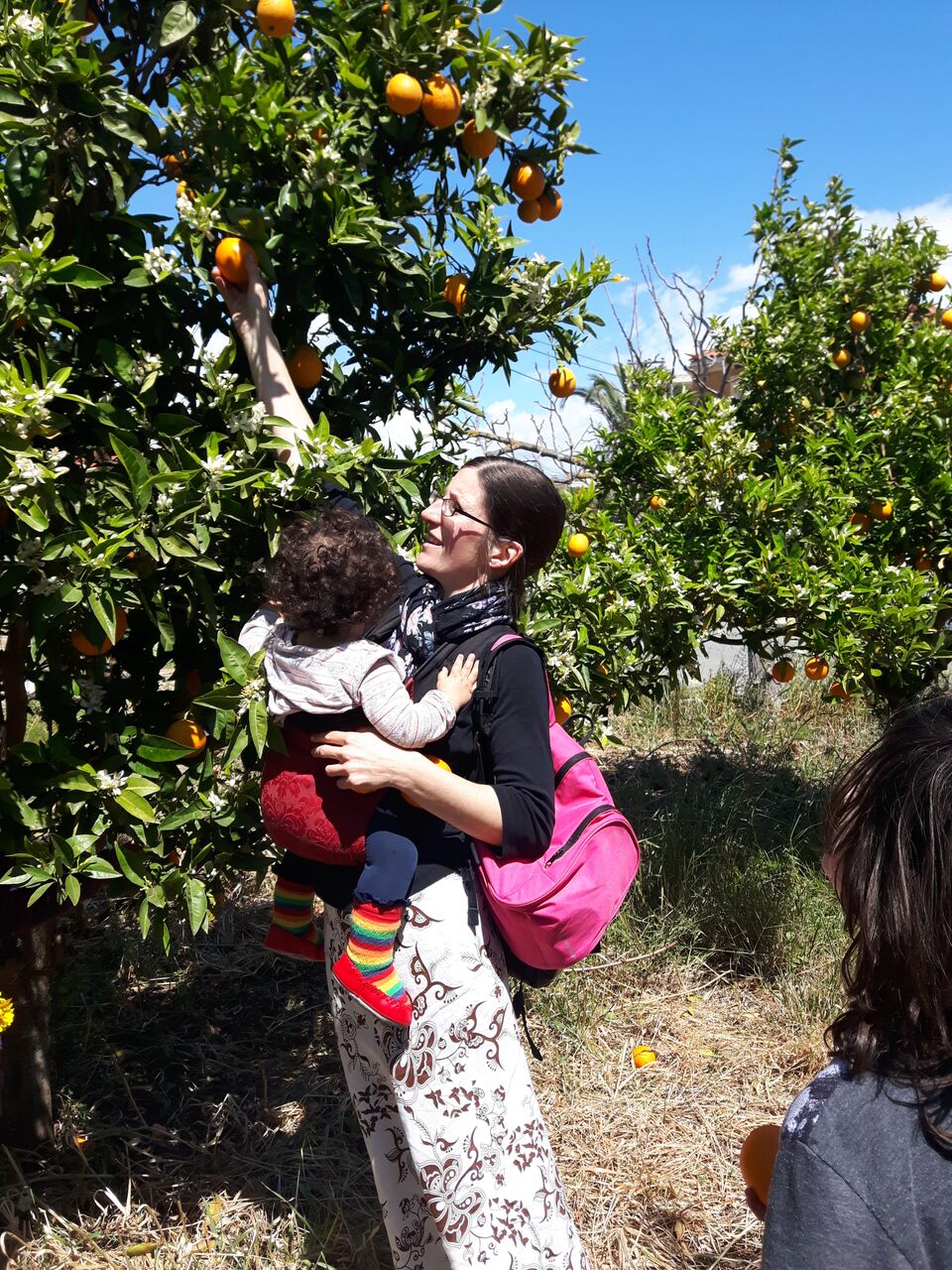 We joined local school children in the nearby village of Papadianika as they decorated candles to be lit at the traditional Γιορτη Λουλουδιών (flower festival) on April 30th. Many May Day festivities take place in Greece, of which this festival is one example.

Religious tradition is very evident in Greece – chapels are built in all sorts of places, and the above picture was taken just along from the Diros caves [a boat trip through the caves was part of the itinerary for the week which I was unable to do due to the wants/needs of my children, yet I have it on good authority that it’s worth the €12 per adult / €7 per child].

Wherever you go, you will see numerous prayer boxes along the side of the road, known as kandylakia. I sadly neglected to photograph any. These are shaped like miniature chapels and often include icons of saints, and incense or candles to burn. As well as traditionally being spots where travellers can stop to pray, they are increasingly used to commemorate lives, particularly of those lost upon the road – there is a joke that roadside kandylakia can be seen as unofficial ‘drive with caution’ signs! 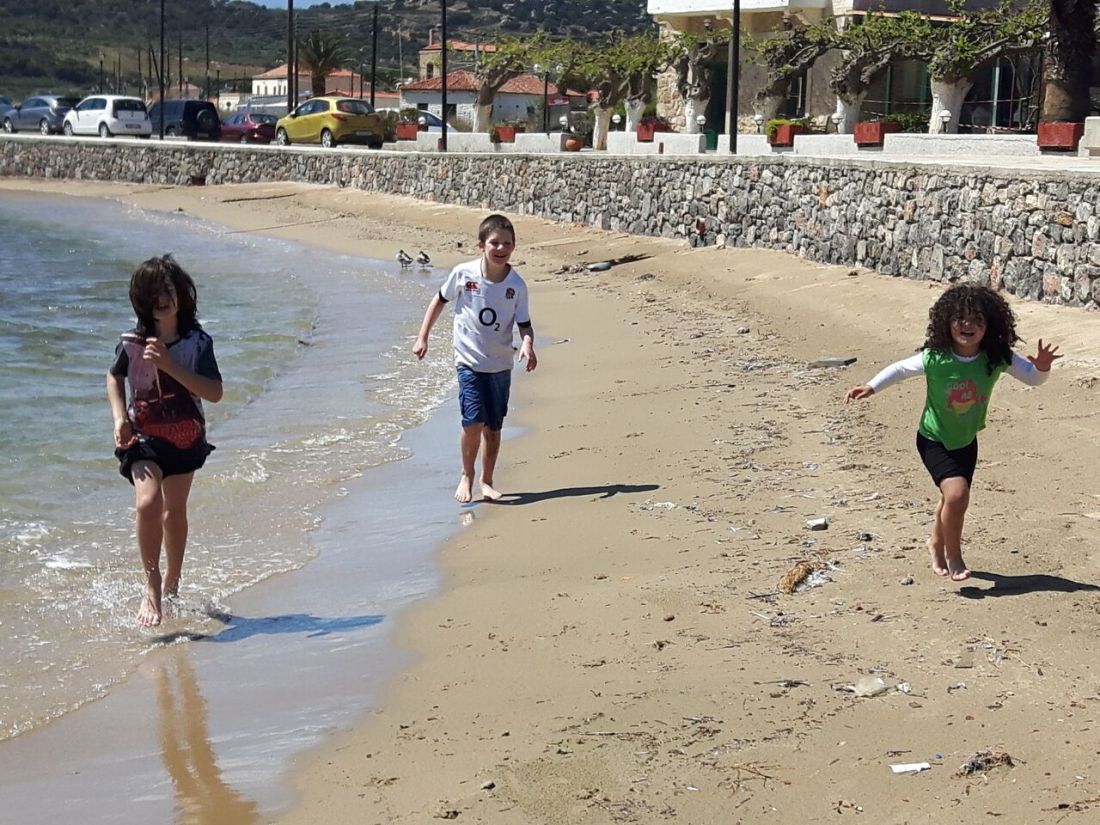 What a treat to have the local beaches all to ourselves in 25+ degree heat! The beach was a short walk from both the home education hub and our accommodation. Just like our seaside home in the UK, the bay at Plitra is calm, featuring sandbanks and a very gradual decline into deeper waters – a perfect beach upon which families can relax, play and paddle.

As the boys went scouring the rockpools, our host scoured the same area for food – the seashore forage finds were an impressive array of herbs and spring greens that well illustrated how ‘frugal food’ is often about the richness and abundance of Mother Nature.

A truly fascinating place for both children and adults, the old town of Monemvasia is an ancient fortified town (now largely restored in keeping with its original style) and it’s worth spending a full day exploring. Our trip wasn’t as lengthy as planned as, unfortunately, the castle and grounds atop the summit were closed to the public due to renovation works. However, there was still plenty to see . . . 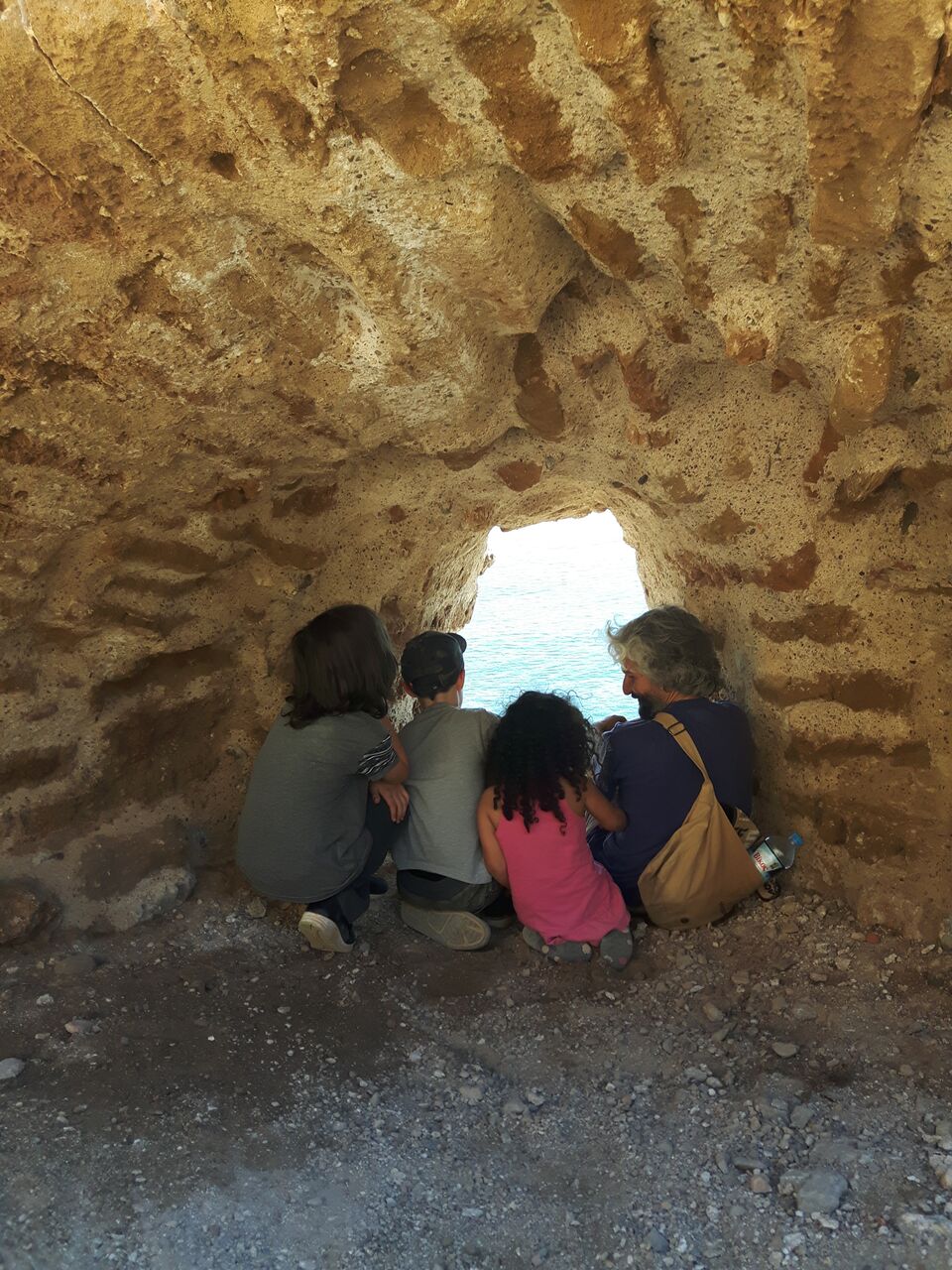 There was a wonderful vibe of history coming alive upon the peninsula of the old town, complete with quaint little shops and cafés that complemented the town’s heritage. Both architectural antiquities and local flora were prevalent here, and I also appreciated the local bee colonies through the purchase of a very sweet honey wine – indeed, Malvasia wine is historically from the town.

The nooks and crannies of the narrow cobbled streets were a delight to explore and the views were divine. A must-see if you’re in the region! 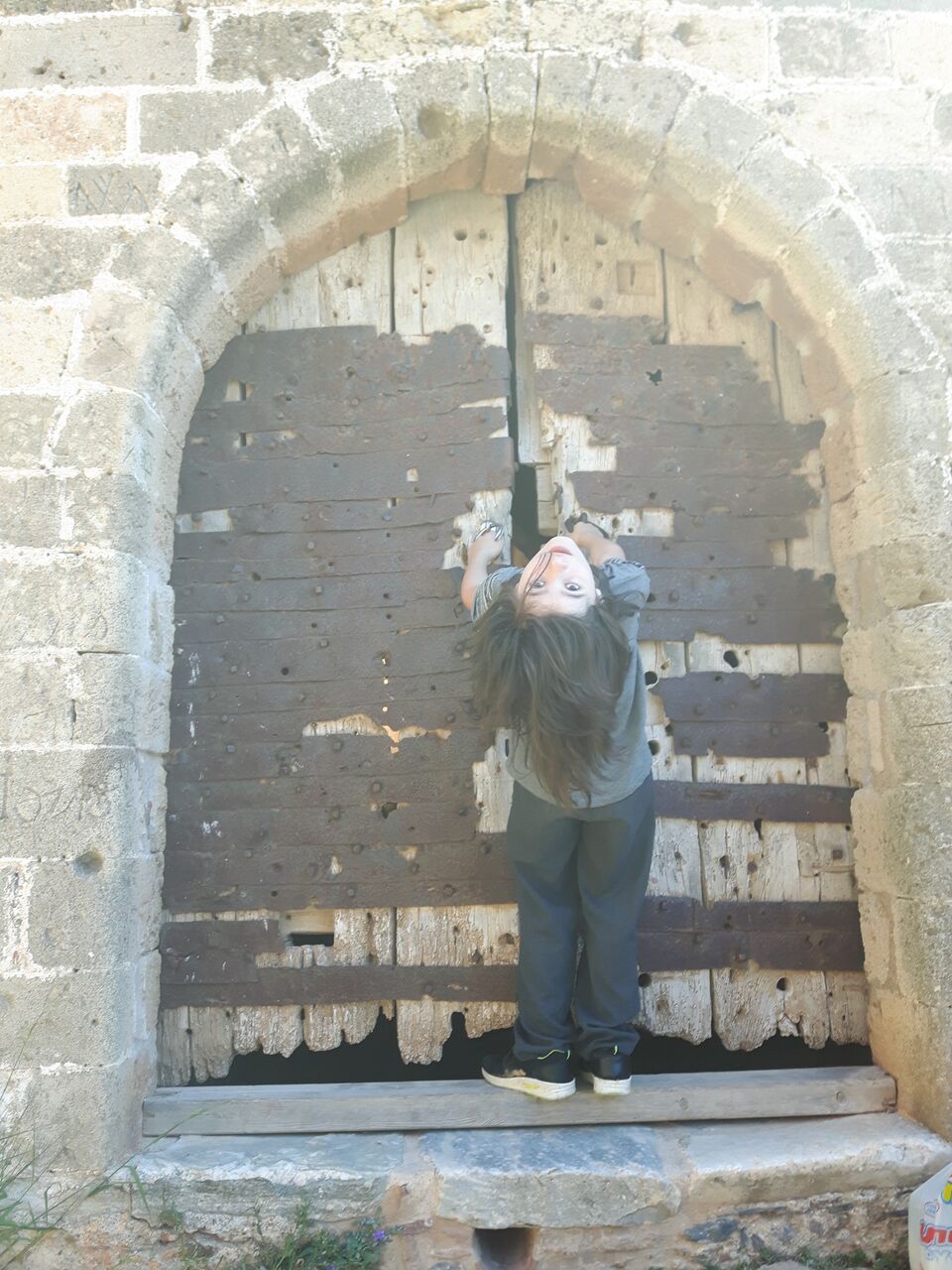 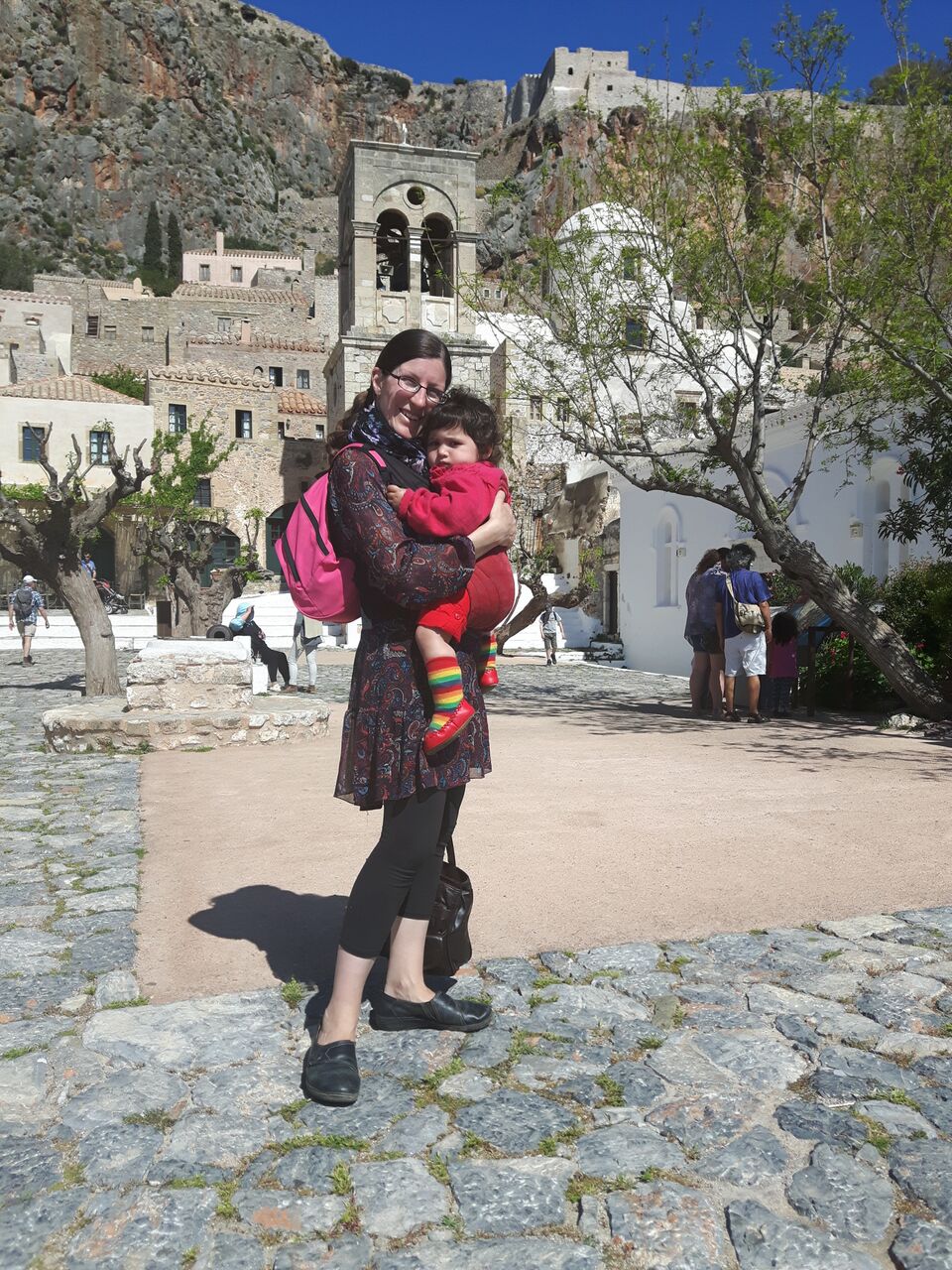 We stopped for refreshments upon Mavrovouni, the longest beach in the region, near to the charming port town of Gytheio. Volunteers observe and protect this beach over the spring to summer months as it is the nesting ground for sea turtles, yet also a busy tourist spot during the height of the season.

As we left the Gytheio area we also spotted the Dimitrios shipwreck on Valtaki beach, where the poor vessel has lain abandoned for 35 years.

The entrance to Gerakas Port is well hidden, historically making this a safe enclave away from looting pirates. A glorious mountain drive took us up and over the headland to this hidden beauty, where the environments of wetlands and sea merge via a fjord-like approach from the sea. I sense this little gem is best appreciated by boat! 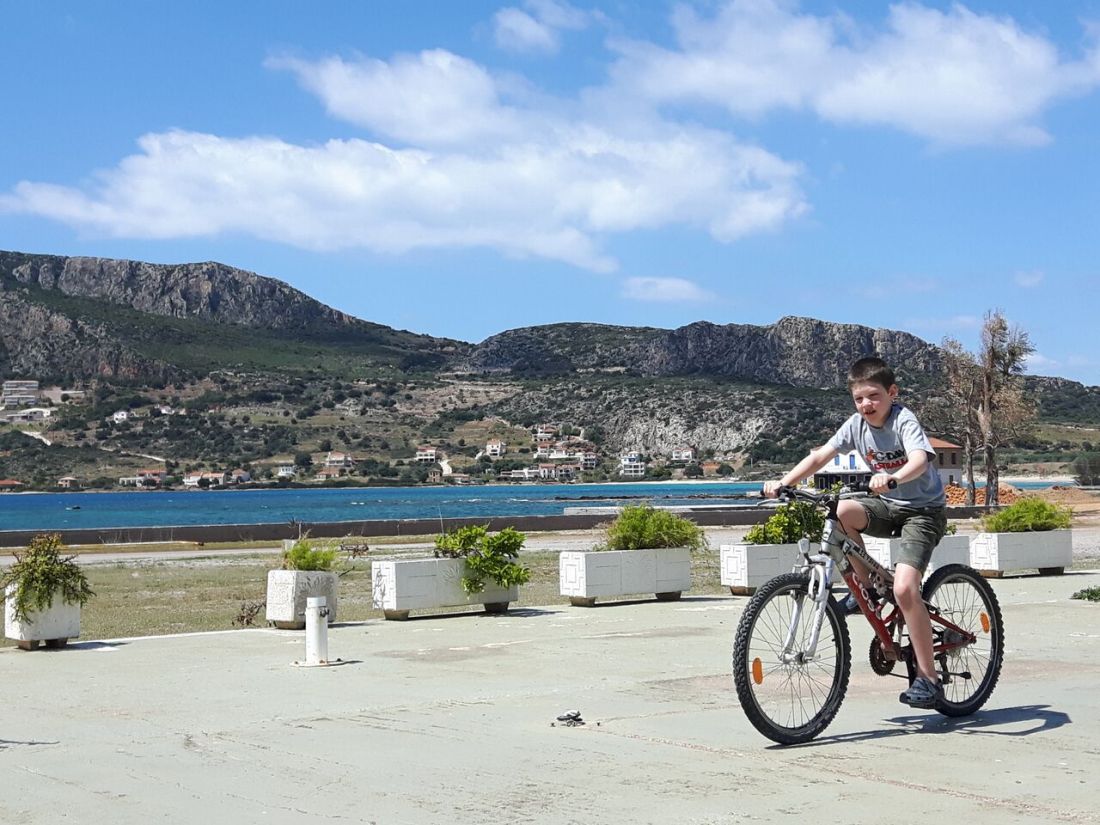 Although the olive-picking season was officially over, there were plenty of olives left on trees in public spaces – the children made the most of climbing them whilst the late olives were collected from both branch and ground (and are now being salt-cured on my kitchen worktop).

Sixteen-month-old FreeToBeL loved the fresh yet bitter fruits, her young palate open to new flavours in a way our modern sweet and salty diet has scuppered for many of us.

Wow! What finds we made here. The ancient Roman port town of Asopos was destroyed by an earthquake in around 365BC and much of it now remains hidden under the sea.

Much of the ‘beach’ here is made up of broken brick and tile, the remains of buildings which last stood over 2000 years ago. A bathhouse, port and temple are some notable remnants along the shore and a number of large storage urns remain partly intact. Sections of pavements and mosaics are preserved, with areas being revealed or masked as the tides strip back or deposit covers of rubble and sand.

There are so many historical ruins in Greece that not all have been excavated and this was very evident here – on one section of beach we found numerous remnants of ancient Grecian pottery, which really quickened the pulse of the archaeologist in me.

FreeToBeP has recently developed a real passion for cooking and has been lucky to have the opportunity to spend time with people who have a true love for good food.

Our host showed us how to make vegan varieties of local dishes (many of which are traditionally made just with vegetables anyway) and the children had opportunity to help out, picking fresh ingredients from the garden and appreciating the food in a new way thanks to doing this.

As much as possible, the food eaten at the Porto Grana Hub is organic, vegan and grown locally or foraged – whilst the hub’s philosophy encompasses both frugality and ethics, we always ate satisfying and delicious meals thanks to our host’s cooking skills and knowledge of local edible plants. 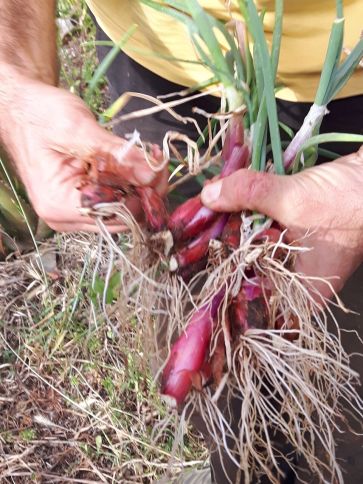 We were surprised with the vast array of foodstuffs that can be foraged for within just a few minutes’ walk of the hub, quite apart from the abundance of olive, orange and lemon trees – wild mountain thyme and edible seaside plants were some of the notable examples, particularly the very tasty kritamo (better known here as rock samphire and something I hope I will, quite literally, stumble over again along the Dorset coast).

All in all, we thoroughly enjoyed our busy week in Laconia and heartily recommend a visit to the Porto Grana Hub to other home educating and worldschooling families!

Springtime was the perfect time to go, the country blooming with greenery yet the temperature already reaching 30 degrees during our stay.

Greece is definitely on our list of places to return to – the history, language, fauna and geology captivated us all, and what we managed to explore in our one week was just a small taste of what the country has to offer.

Oh, and did I mention the animals, playground and family yoga session? 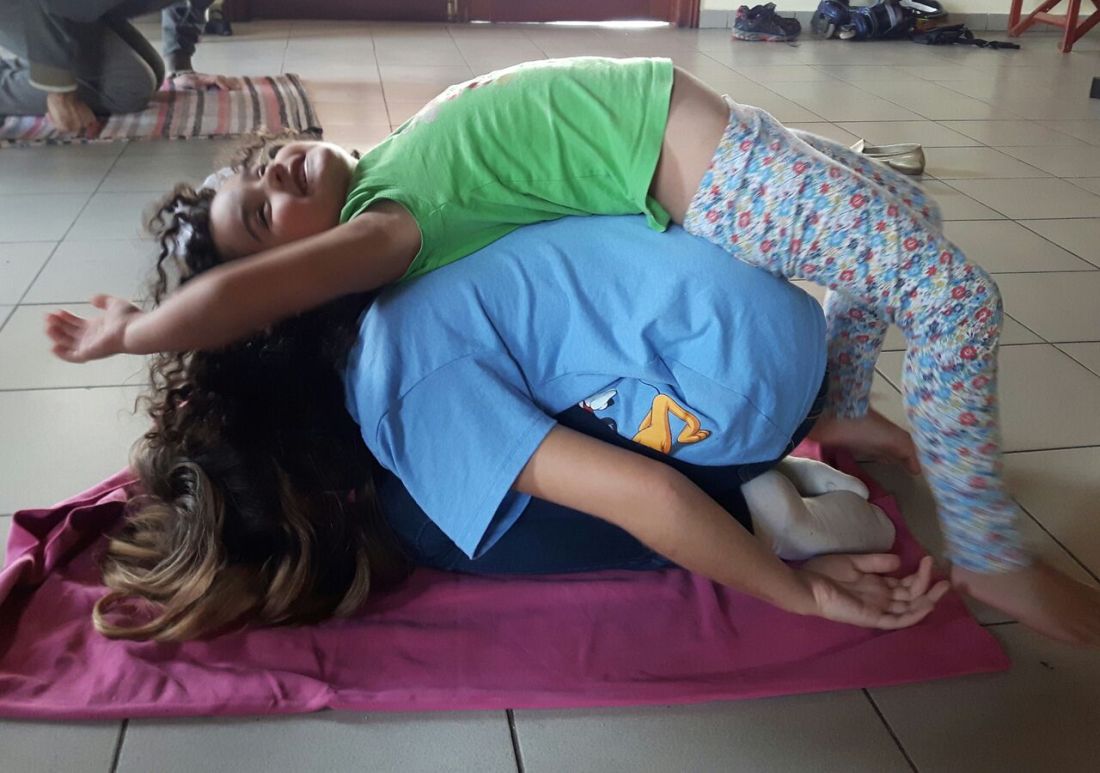 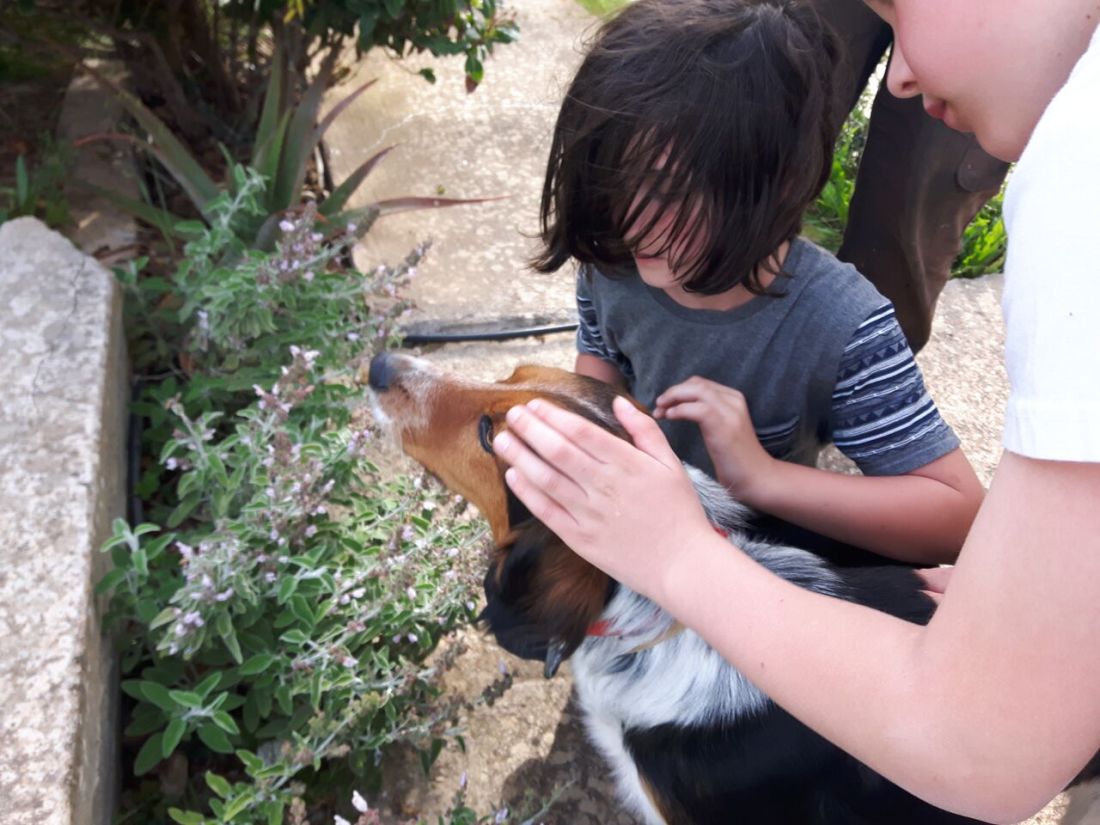 Published by Free To Be Family

View all posts by Free To Be Family

2 thoughts on “Edventuring in Greece”